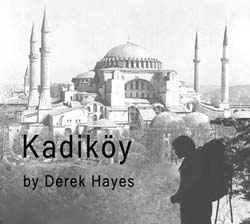 To the new teacher:
Oriel Bey asked me to write directions to the Hac Şükrü apartment from Eminönü.

You’ll be living with Brian. He’s a nice guy.

On the trip to Kadıköy, on the ferry boat from Eminönü, you have the choice to sit either inside the hull of the ferry in the airless heat, near the headscarf-wearing, older women or outside on the wooden paneled benches that curve around the boat. Sitting inside, you’ll get off the ferry sooner, but your view is limited. Sitting outside you are close to the water, with only a flimsy rail preventing you from falling in. You are sprayed with polluted, salty mist from the Bosphorus. Plastic bottles, toys and store-wrapping, insulated by liquid waste, bump against the boat. You pass enormous cargo ships that are unloaded by cranes. Little boys flick pieces of bread at diving seagulls that snatch the bread out of the air………..

READ THE COMPLETE CHAPTER 1 of Kadıköy.

A Feel for America

We’re waiting for Mr. Hou, the owner of our school and this building, to arrive. Adam’s striking a soccer ball with his right foot, aiming at meat-eating cockroaches that scuttle over unidentified particles on our red tile floor. A solitary, insolent cockroach clings to the bathroom door, one tenacious limb gripping a groove in the woodwork. With his toe, Adam takes a violent stab at the ball, which flies at the door, squashing the cockroach’s leg, leaving it dangling. The ball bounces away, but Adam remains where he is. Apparently he’s waiting for me to fetch it. Which I do, returning the ball with an insouciance that hopefully preserves some of my dignity. In our two months together, although I haven’t witnessed hostility, Adam carries himself with a belligerent ferocity that reminds me of the glass-breaking thug in the movie Trainspotting.

Mr. Hou calls from the other side of the screen door. “You guys have a new housemate,” he says with a lisp. His hair has been dyed black, which looks strange considering that he’s over 70 and his face is wrinkled. He was probably attractive in his younger years.

“Nobody was using drugs. Iggie and Steve just seemed like they were on something,” says Adam.

“I like you Adam, but this is your last chance. No more hiring. No more training. If this doesn’t work, I’m selling the franchise and I’m firing everyone. I’m going to start a kindergarten,” Mr. Hou says.

READ THE COMPLETE STORY “A FEEL FOR AMERICA”